Getting it wrong could have a devastating effect on you both.

I was listening to an Audio Dharma podcast while working out the other morning, in which the host, Gil Fronsdal, tells the story of a teacher who gives beeswax to her pupils and tells them to hold it in their hands while she tells them a story.

The purpose of the story is to let the beeswax warm between the children’s hands so that it will be malleable and won’t break when they start sculpting with it.

The point Fronsdal makes is that we are the same as beeswax. If you try to change yourself when you are “cold,” you risk breaking yourself into pieces.

The purpose of meditation practice, he explains, is, therefore, to warm yourself up so that you can change easily, without breaking.

And because I’m always thinking about relationships and sex and kink, even when I’m going on the elliptical with a 150 bpm heart rate, it struck me later the same truth applies when trying to push boundaries and break limits in kink.

Pushing Vs. Breaking
When you run in kinky circles, you often hear people say things like “I’m going to break you” or “I want to be broken." What these people are expressing is their desire to push against boundaries, sometimes even go past them or make them irrelevant.

But trust me nobody wants their limits broken cold.
I used to consider breath play hard limit. Breath play scared the hell out of me (and still does a little), but then I let M explore it with me.
At first, it was just short little bouts, with his hand around my throat tight enough to just let a filet of air through. We agreed beforehand on a very obvious signal I could use to tell him to stop at any time, and which he honoured every single time I called on it. That experience was important in establishing trust.
Then at one point, he told me, “I’m going to cut you off completely today.” And I was okay with that. The signal worked, so I trusted that he would follow it and not kill me.

And so he cut me off for just a few seconds. I signalled, and he stopped.

It’s been a while now and my breath play limit has gone backward a little because I will need to establish trust with someone again, but now I know that I can be warmed up to it and that even a current hard limit (no tight neck rope) is something I could eventually be pushed through.

However, try to suggest strangling me with some rope right now and I’ll be like, “F*ck, no!”

Let me use a (terrible) graphic to further explain what the difference between helping to push someone through a limit versus downright breaking a boundary. 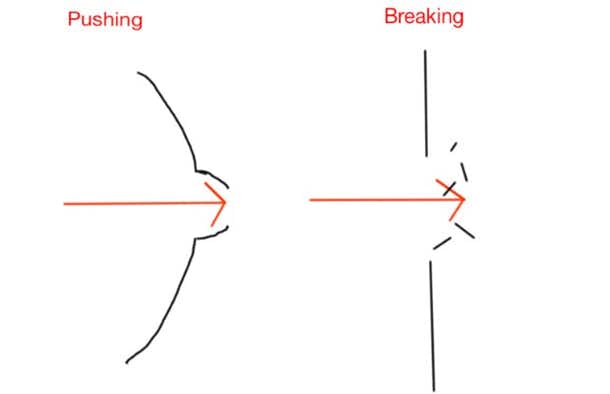 In the case of pushing, you meet with resistance, but the membrane is permeable. You can actually reach through to the other side without breaking the whole thing apart. This leaves a person’s identity intact and their boundaries whole and safe.
However, in the case of breaking, well ... the person breaks.
Bits and pieces of who they are get shattered everywhere. Their identity becomes compromised and all kinds of shit can make it through that you wouldn’t want. Sometimes it can feel like their other boundaries are broken at the same time, and that’s a big no-no.
Well, unless you actually want to be an abusive asshole.

I’ve had the luck never to have a boundary downright broken cold, so I don’t know how it feels, but I’ve read many accounts of people feeling, literally, broken, and betrayed, and somehow like something went wrong. And I can totally see that.

When I have my boundaries pushed, I want to be able to softly adapt to my new shape, absorb the lesson and establish new boundaries that fit my new reality.
What I don’t want is to have to pick up the pieces of myself that a kinky play session left behind. Even with the best aftercare, breaking boundaries is a risky proposition, especially if you want your partner to still trust you afterward — and ever play with you again.

When I say “push me,” I want you to take me to my edge — to that place where you know that I’m about to call red. And yet, I don’t call red, because you approach the edge gently, but firmly, taking me just a little further each time.

It’s a little bit like stretching in yoga. You don’t go so far as to hurt yourself, but you push firmly enough against your muscles and joints that you feel a little burn, and then, eventually, you’ve pushed firmly enough for long enough that you gain an extra half inch in flexibility … Then an inch … and so on.

For me, it demands trust, understanding, love, connection, communication, and respect.

It demands full and constant awareness of your submissive’s status. Verbal check-ins. Debriefings. Reassurances.
In all honesty, why are we playing with power exchange at all, if not to push our boundaries? There's no growth in remaining stagnant.

Your submissive (or yourself) is a piece of beeswax. You cannot sculpt it if it’s cold. All you would end up with would be sharp pieces scattered across the floor, and they’d be extremely difficult to put back together.

But if you take the time–to get to know them, to listen to them, to establish deep trust and understanding and connection ... You’ll discover that you can shape them much more smoothly and easily into whatever you want them to be.