How To Train Your Man… 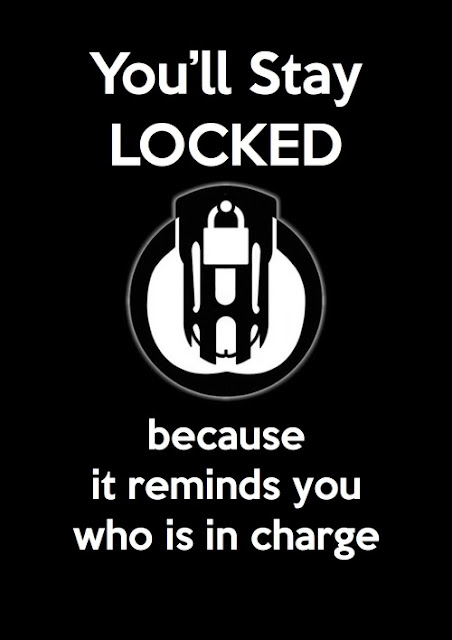 Yeah, yeah…there will always be exceptions. But seriously…this is it. Men are incredibly easy to train if you understand what drives them.

Some women and men are of the opinion that keeping a male sub in constant, long (or very long) term chastity is the most effective way to train. I completely disagree. The reason for this is simple: if a man knows his cock will never be allowed to come, then the orgasm ceases to become a motivation, or a carrot, if you will…

So here is what I do. I use the cock/orgasm to reprogram and condition my slave. So what follows involves using chastity as a training device rather than as a punishment or way of life. Basic steps look something like this:


1. The chastity device.
There are many versions out there, but for this to work, this needs to be a device that is secure and lock-able. I must have the key. I have the power over his cock and he cannot escape. This is an enormously powerful and symbolic message.
2. Putting it on.
Eventually, wearing the chastity device will become second nature – but you must set the example, set the stage, the first few times that you put the cage on. The manner and words and attitude that you adopt when you put this on him for the first time will stay with him as he wears it, and going forward, how he feels about wearing it. The first few times I make sure that he knows how meaningful this is…that I am purposefully choosing to take control of his body, that I am taking his cock, his symbol of masculinity, away from him. Owning it. Controlling it. Mine. For as long as I wish. I make him beg me to put it on. I make him watch as I lock it. I make him thank me for doing it.
3. The Rules.
Now, I have him. He’s mine. Seriously. What will a man not do to have his cock, his pleasure? Both are now mine to command. It is best to have thought this out very carefully before locking him in. Chastity training is very powerful and making mistakes here isn’t desirable.

For the best results, these three components are essential:
Begin with (potentially) brief and clear-cut stints in chastity
Make the things he must do to get out of chastity and/or earn his orgasm very straightforward and obtainable


Keep your promises
If you want chastity to be an effective tool, he must see that his behavior is directly tied to his release. At first, the cause/effect correlation must be very clear. Most importantly, you must keep your word. If you say that he will be allowed release from chastity after he has made you breakfast in bed five days in a row, then you must keep your promise. There are lots of memes out there depicting women changing their mind about allowing their men out of chastity. For initial training purposes, this is an absolutely horrible idea. If your sub loses faith in the cause and effect nature of chastity, he will ultimately cease to trust that his behavior will have any impact on his release – thus lessening the power of your ‘threats’.
Now, once his brain has become re-wired and he realizes that he must behave…your timelines can become longer, the tasks more complicated, and you can occasionally change the rules. But I repeat – this should only be done after you have effectively broken him and trained him.

The benefits of male chastity
My rules tend to force him to focus on my pleasure – to force his brain to begin associating my pleasure as a prerequisite to his. Example: He must give me a certain amount orgasms before he is released. Now, I don’t need chastity to have him do this. First, he’s happy to lick my pussy at any time. Second, I could just tell him to lick my pussy at any time. So… why connect this to chastity? Because this is more than him deciding, or me giving an order. This is my choice to literally re-wire his brain to associate my orgasms to his own pleasure. And I don’t keep what I’m doing a secret. I want him to know what I am doing. I want him to know that his body is just the tool I’m using to control his mind. Of course, I add other things on as well, but my pleasure should always come first.
4. The Reward.
Any time the chastity device is taken off, it should be clear that it is a kindness that you are bestowing upon him. Before it is taken off, the rules of his behavior should be crystal clear to him. Is he allowed to have a full orgasm immediately, or at a certain time? For the most effective training, I recommend that immediately following his release, you arrange for an incredibly powerful, satisfying orgasm. One that YOU take part in– either directly, or indirectly. This intense pleasure will reinforce how desirable it is to be out of chastity, and how hard he should be willing to do whatever it takes to earn his freedom from it.

Later, once he has been conditioned and well trained, he will be grateful for a ruined orgasm…for being allowed to touch his cock at all. But for initial training, the orgasm should follow as soon after release as possible. Again, this is quite literally re-wiring his brain to associate you and your control of him with pleasure.
Important Tips
If you keep your sub in long term (longer than a month at a time) chastity, it is important for his health that you milk his prostate monthly. This can have the added bonus of highlighting your absolute control over his body.


Be sure that you understand how to properly fit and install a chastity device. An improper fit can cause un-fun pinching or cause un-fun bruising or blood flow problems.
If you intend to keep your sub in chastity for longer than a day, make sure that you are using a device that will allow for air, and proper hygiene.